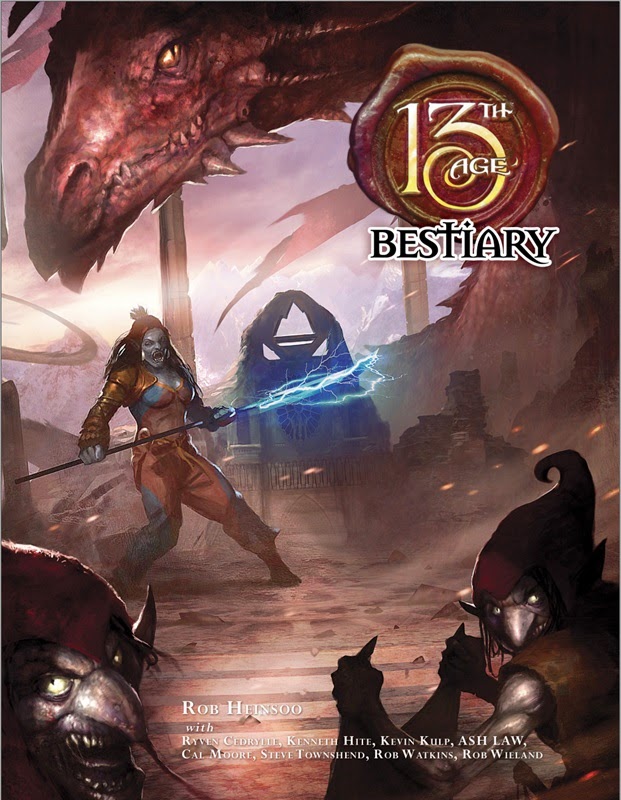 No RPG supplement excites me as much as a good monster manual. I'm certainly drawn to buy them whenever they come out for any system. I love flicking through the pages, searching for plot hooks and how and where I can use a monster in an adventure or two. I have so many that I'll never find time to use all the monsters I love.

That hasn't stopped me buying the 13th Age Bestiary, however. On the contrary, I've been waiting for my hardback copy with baited breath since I preordered it back in March. I've had the PDF, of course, but that's never the same.

If there was one aspect of the 13th Age Corebook that was disappointing, it was the section on monsters. Although they were mechanically interesting, information on them was limited to merely a sentence or two and there was no art representing them either. The Bestiary seems to have been in direct response to that, and the response is superb.

The Bestiary contains write-ups for 52 monsters, most of which have several variants, taking the total over 200. There's a lot of material here, all held together by the brilliantly simple mechanics that govern 13th Age's monsters and the open ended Dragon Empire. It's really good.

Monsters: You Can Never Have Too Many

The Bestiary fills in some important blanks that make up the staple of D&D monsters - ettercaps, chuuls and genies just naming a few. As expected from 13th Age, each of these contains a twist on the concept. Ettercaps are hoarders of secrets, though they still retain their affinity to spiders; genies are subject to a pact with the icons, able to interfere in the world for a time but that comes with the price of servitude; and chuuls are still lobster like aberrations, but they also lay eggs that can be cultivated into weird symbiotic magical items. All of this information is delightful and how much of it you use is up to you. It's nice to have these fresh takes on old ideas, allowing me the choice of presenting the 'classic' vision outlaid in various D&D sourcebooks over the years or put a new spin on things by taking some of the new flavour from these entries.

There are plenty of new monsters in the book too (at least to me), from the deadly and seductive jorgumo, the fourth wall breaking redcaps and clockwork zorigami, again, naming just a few. Each is just as brilliantly realised as these writeups for the more traditional monsters and they're all just as mechanically interesting. I particularly like the redcaps - there's something incredibly devious about the way their 'bad word' breaks the fourth wall (and I won't spoil it for you!)

Also unexpectedly slipping in is the 'twygzog' player character race, nestled within the entry for fungaloids. I wasn't expecting to find this at all. The idea of a humanoid mushroom prince cut off from the overmind is quite interesting, and has some nice roleplay potential. I'm not sure I'd play one myself but it's a cool option that players looking for a quirky and different race will appreciate.

You'll also find some expanded options for some of the most well known D&D monsters. Both white, black and red dragons get a lot of love, as do the drow. These are the kinds of monsters you'll be using again and again in your games, so having more options will never go amiss.

The monsters all show off how brilliant the way 13th Age handles monsters is. As a DM, I really appreciate how you only really have to worry about whether a monster is using its attack against enemies engaged with it or not. Letting the dice roll decide what else the attack does frees up my mindspace to think about more interesting things and improvise more entertaining descriptions. Having monster abilities trigger in this way also means that there's innate variety in the way monsters behave, and because it's inherently unpredictable it keeps players on their toes. I really like 13th Age's monsters.

Detail, so Much Detail!

Each entry is filled with wonderful detail. Completely opposite to the Corebook, each monster is given at least a few paragraphs of description before moving onto the individual monsters themselves. Even there, many of these monsters are given full writeups themselves. There's a lot to get your teeth into in these alone, inspiring adventure and encounter ideas.

Each entry also has a full colour artwork accompanying it and, although the art style is not to my personal taste, it's nice to have something to show the players to get their imagination going.

Alongside a description, monsters also come with advice on building battles (great when you're in a rush and just want to build a quick encounter), how they may or may not relate to the icons and a list of adventure hooks (again, great for when you're just looking for a quick idea to get the imagination going!).

Many come with even more than that, with quirky lists of sample loot and other esoteric elements. Ettercaps a list of secrets they keep, fungaloids come with sample environments, and death plague orcs come with example diseases and accompanying rules. Little bits of flavour fill this book from brim to brim, making each entry more than just a simple stat block and picture. You couldn't ask for more from a monster manual.

All this detail has really sold me on the Dragon Empire too. Seeing how its denizens live within it and add to it, as well as the myriad plothooks and ideas within this book, has really helped to set it apart and give it the depth it needed for it to interest me. It's still so entirely open ended that I could, if I wanted, do almost anything I wanted with it. And because everything is written in such an open way I can just cherry pick the appropriate ideas when I'm running something not set in the Dragon Empire.

How to Make a Monster

Right back at the beginning of the book is a set of 'Odd Monster Lists' that might come in handy. They're quite fun to read and, although quirky, are actually really useful. 'Monsters That Cloak Themselves in Lies' is a favourite.

At the end of the book is a great guide to monster creation. Working up from simply reskinning a monster, to tweaking one to be more suitable to your purpose and, the real meat of things, actually creating a monster from scratch. Here monster creation is broken down into two main areas - attacks/abilities that use the d20 and those that use the escalation die. The d20 section comes with a great list of triggers for effects to work from, including some of which that might not have occurred to me otherwise, like using the players ability scores as triggering numbers. (For example, to see if a player contracts a disease, see if the attack roll beats his ability score). I'll definitely be referring to this advice when I make my own monsters.

The Monsters That 13th Age Deserved

Artwork aside, this is everything I want in a monster manual. I've really enjoyed using the monsters I've picked so far and I can't wait to try a few more out. The amount of detail given means they're more than just stat blocks to kill the players with too, you can really build adventurers and stories out of any of these.

If this is the standard the sourcebooks for 13th Age are going to be hitting then I think the game is going to be going to some great places. I'm really excited.