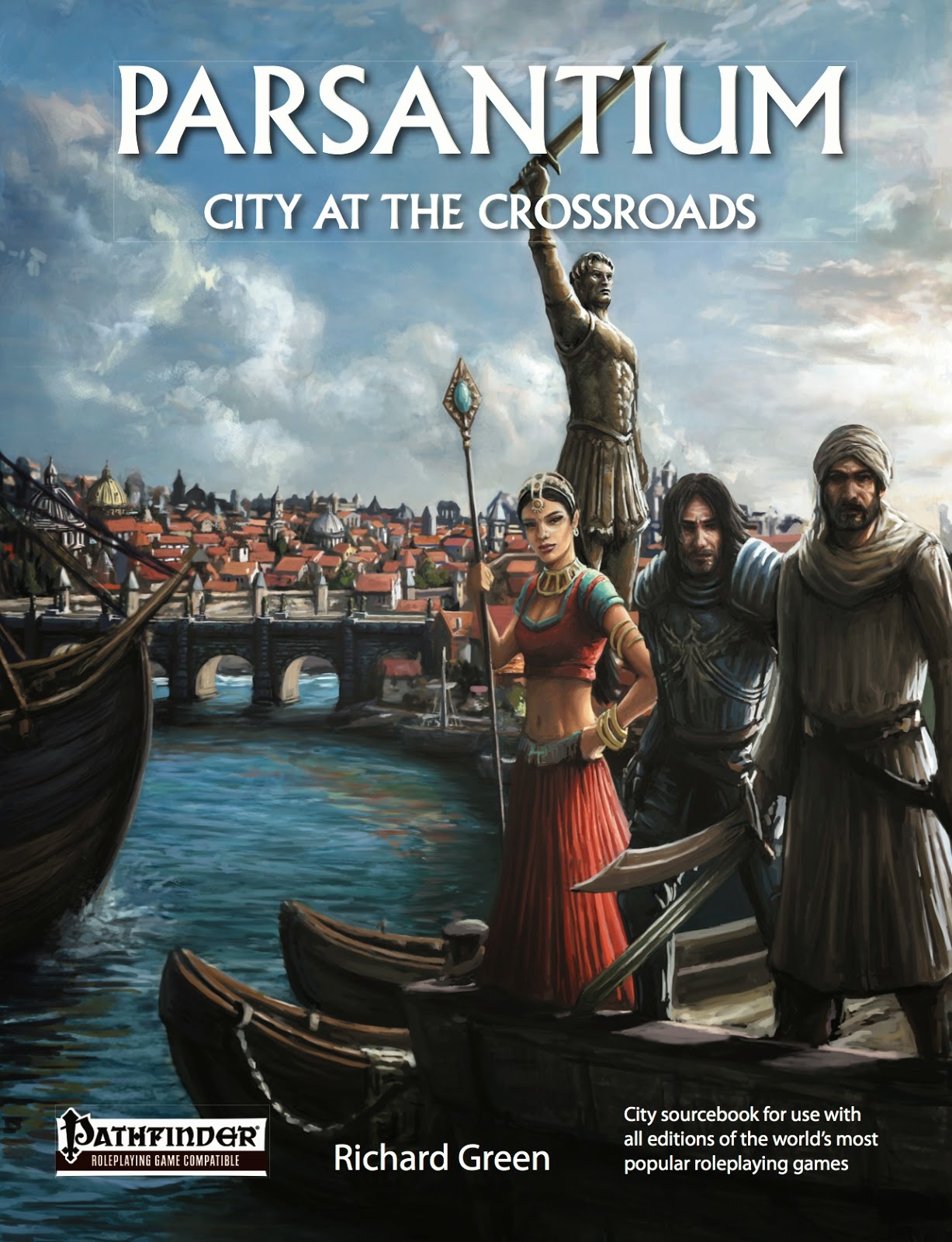 Parsantium is a melting-pot setting for fantasy roleplaying games, able to stand alone or be incorporated a city within an existing setting. Taking it's primary inspiration from the great city of Constantinople/Istanbul, centre of trade and both the Byzantine and Ottoman empires, with a smattering of southern and eastern Asian influences, Parsantium is a truly cosmopolitan city fitting for almost any kind of adventure.

City at the Crossroads
Ruled by it's king, the basileus Corandias XVIII, Parsantium stands at the centre of several important trade routes. This brings characters from all across the known world into the city, meaning that far from being static, any number of interesting things could be going on and new characters can constantly be introduced.

The current rulers (and they have ruled more or less constantly for centuries), are Barthuran. This is a Greco-Roman culture, based heavily on the ancient Byzantines. The original settlers were the Sampurans, fleeing persecution. The Sampurans are heavily influenced from indian culture, only with bonus monkey people. The monkey people are pretty rad.

Adding to these cultures are the Aqhrani, who add an arabian flavour reminiscent of the old Al-Qadim D&D setting, and the Tiangon, who bring a touch of the oriental.

There are villains aplenty, from the traditional orcs and hobgoblins to devious rakshasa and dark, hidden cults. There's a lot for enterprising players to sort out!

A Living City
Parsantium is a living breathing city, richly detailed, with intertwining plot threads and locations that give GMs plenty to work from. Important NPCs are given plenty of description, including motivations and history, as well as a rough guide to their power level. As the book is system agnostic no stats are provided, which may be a turnoff for some. This has meant there is more room for solid, well thought out, background, which for me is a plus. There are some really interesting characters in Parsantium, usually with several connections to plot threads and many have some very interesting secrets. Because there are several different cultures within Parsantium there is a great variety within the NPCs.

More than that though, even little details could be plot hooks. I really enjoyed reading the gazetteer section which detailed the city, and particularly the 'First Impressions' and 'Passers By' sections, which are filled with both flavour and plot hooks that would work particularly well in a sandbox game. Each little vignette contained within them is charming, and often surprising. It seems everyone Parsantium has a story to tell!

A lot of work has gone into making the city so rich and alive. There's even a table to help GMs discover what occurs during the city during downtime or particularly long adventures.

History in the Making
There's a lot to see and do in Parsantium. It would impossible to try and do everything! Either as a sandbox or a structured campaign, there's plenty to draw from. Political intrigue, exploration, mercenary work, gang wars, dark prophecies, and evil cults can be combined to create almost any adventure you might think up. There's even a hidden undercity, filled with all manner of evils (some known, many not!) for your traditional dungeon delve needs.

With such a lot to draw from, players have a lot of exciting options open to the for characters too. Traditional D&D characters can be found, of course, but with all these interesting cultures and factions there's plenty to draw inspiration from and, Parsantium being what it is, a truly varied party wouldn't seem out of place or cartoonish at all. This is a setting I'd love to play in just as much as run.

Highly Recommended
I can't recommend Parsantium enough if you want a rich, detailed setting for your fantasy roleplay that's different from the usual fare. No matter what kind of game your players like, Parsantium can fit it in.

If your preference is for 13th Age, Parsantium icons are being rolled out on the Parsantium blog.